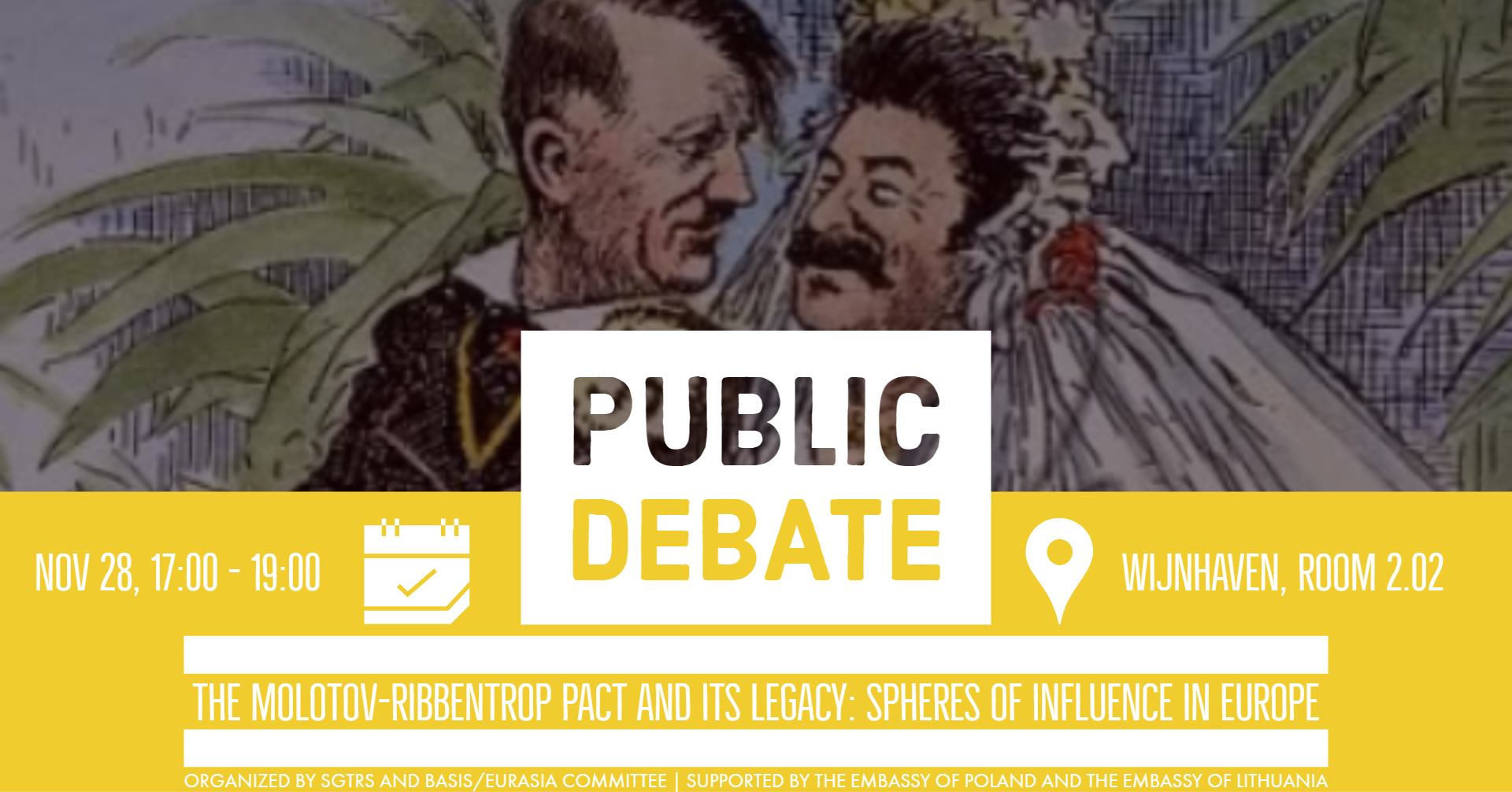 📍 THE MOLOTOV-RIBBENTROP PACT AND ITS LEGACY: SPHERES OF INFLUENCE IN EUROPE

80 years ago on 23 August 1939, the Soviet Union and Nazi Germany signed a Treaty of Non-Aggression, known as the Molotov-Ribbentrop Pact, and its secret protocols, dividing Europe and the territories of independent states between the two totalitarian regimes and grouping them into spheres of interest, which paved the way for the outbreak of the Second World War.

On November 28 from 17:00 – 19:00, at Wijnhaven in room 2.02, BASIS/Eurasia Committee in collaboration with SGTRS – Foundation History of Totalitarian Regimes and their Victims will organize a public debate on:

— The Molotov-Ribbentrop Pact and its Legacy: Spheres of Influence in Europe —

Join us for some interesting and highly relevant insights into the long-term consequences of a pact signed 80 years ago, with academic experts engaging in a debate which is still meaningful for Europe today! 🎓

• Professor Sławomir Dębski: Director of the Polish Institute of International Affairs. Prior to this, he was director of the Centre for Polish-Russian Dialogue Understanding. He has also been member of the Polish-Russian group Difficult Matters since 2008 and an advisor to all of Poland’s governments since 2000. He is author of many books and academic articles as well as several collections of documents of Polish foreign policy and history of diplomacy.

• Dr. Kęstutis Kilinskas: Assistant Professor of History at Vilnius University. His doctoral dissertation and publicationsdeal with Lithuanian foreign policy, military history, war and related subjects.
His publications have appeared in Lithuanian and English in journals such as Lithuanian Historical Studies, Acta Historica Universitatis Klaipedensis, Archives of War and others.

• Professor André Gerrits: Professor of International Studies and Global Politics, and Chair of the BA Urban Studies, based in The Hague. Previously, he held the chair in Russian History and Politics at Leiden University and the Jean Monnet Chair in European Studies at the University of Amsterdam. Gerrits was also a
Senior Research Fellow at the Netherlands Institute of International Studies Clingendael.

• Hugo Klijn: Diplomat en currently senior research fellow within the Security Unit of the Clingendael Institute. The main focus of his work is on Transatlantic security issues and arms control. He has a special interest in the Russian Federation and the former Soviet republics. At the Netherlands Ministry of Foreign Affairs, he worked in the Security Policy Department, the European Department and the Strategy Advisory Unit. He held foreign postings in Moscow, Belgrade, Brussels (NATO) and Vienna (OSCE).

• Adriaan Jacobovits de Szeged: Retired top-diplomat. He served as secretary to the Royal Nederlands embassy in Moscow, was director-general for political affairs at the Ministry of Foreign Affairs, Permanent Representative at the United Nations and NATO and was embassador in Washington. Since his retirement he has been a
member of the Advisory Council for International Affairs of the Netherlands government en parliament, and special representative of the European Union for Moldavia.

17:00: Welcome by Vidmantas Purlys, Ambassador of Lithuania in the Netherlands

17:05: The genesis of the Ribbentrop and Molotov pact and its consequences for the Baltic States(by Dr. Kęstutis Kilinskas, Vilnius University)

17:25: The Molotov-Ribbentrop Pact and its long-term consequences (by Professor André Gerrits, Leiden University)